February’s Club Night saw the welcome return of the Let’s Go Quiz, with the questions set and being posed by our resident brainbox teaser – quizmaster Teresa Cooke. Answer papers and pens duly handed out to those taking part and team names cleverly thought up. And the usual warnings to members not to ‘google’ the answers on their smart phones for fear of expulsion into the cold, dark February night administered, an expectant hush descended on the room. Teresa set about the task of vexing the members little grey cells (little grey cells!!! Poirot has sneaked back in from the Murder Mystery Night) with question 1 of 30.

The questions ranged from ‘who framed roger rabbit’ (Judge Doom) – sorry wrong quiz. The questions set included ‘who wrote Winnie the Pooh’ (A.A Milne) and what is the population of Liverpool (466,400)

All very vexing for those taking part, especially as Teresa, relishing in the reprise of her portrayal of the Weakest Link’s Anne Robinson, it all seemed to be pointless, but many reached the tipping point as the answers were revealed. The hush was broken with mutterings of ‘I told you so’ and ‘well, I never knew that’.

I’ve started so I’ll finish – with the winners being pictured below. 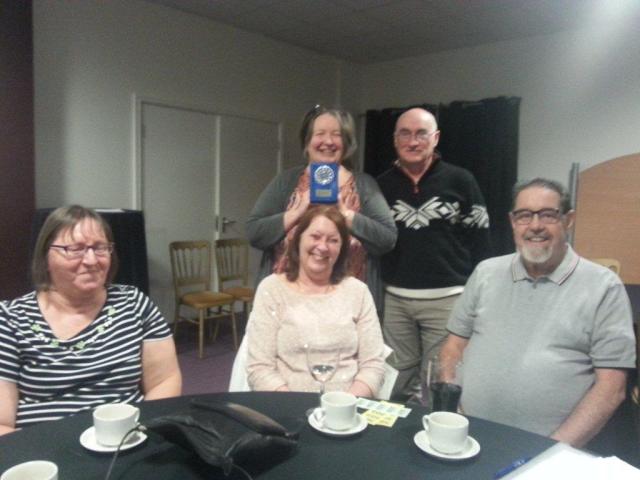 For their efforts, powered by many cups of tea by the looks of it, they were presented with the Let’s Go Quiz Night Trophy and the knowledge of being the latest Eggheads to beat Quizmaster Teresa.

Now where did Poirot get to, I want to ask him about the Orient Express…..