With only a small amount of ‘Arm up the back’, Teresa Cook was persuaded to compile a quiz for the club meeting in July.

Copious hours were spent watching The Chase, Mastermind – ‘I’ve started so I’ll finish’ – and University Challenge – ‘here’s your starter for ten’ (ok, so I lied about the last two). After pouring through numerous quiz books, locked away in a darkened room, she came out into the light, her mission complete!

The Let’s Go Club’s version of acid tongue Ann Robinson took to the microphone and asked her 20 questions as if she was born to it.

Warnings were issued about the grave consequences to cheats, no googling the answers on mobile phones, it would be ‘Goodbye to the Weakest Link’.

Nobody dared to question quizmaster Teresa’s answers, such was the command that she had over the room. Sounds of muttering and cursing could be heard from the gathered masses as the answer sheets were handed back to them.

There was no response from the quizzers but a wry smile could be seen to flicker across Teresa’s face.

‘16’ was acclaimed to be the top score coming from the far side of the room. This was claimed by the team of Martin Higgins, Marion McDonald, Shaun and Ann Dutton and Sylvia Attwood.

As promised and at great expense, the Let’s Go Club Quiz 2015 glass trophy was presented to the winners. 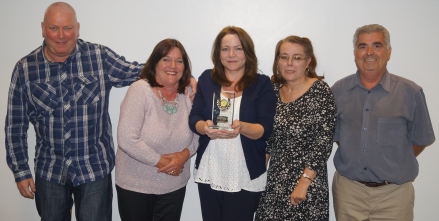 We see them clutching the spoils of their victory.

It was something different for the Club Night but it went down very well so we will have to do it again!!!

Anyone volunteering as quizmaster has a hard act to follow!!!